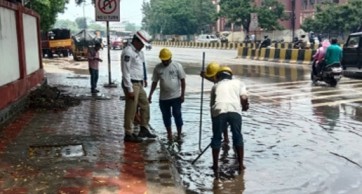 Roads and streets were flooded due to heavy downpour since 8 a.m. Several parts of the city and outskirts were pounded by the rain.

School going children and people going to workplaces faced severe hardships in reaching their destinations due to traffic snarls.

As heavy rain during the peak traffic time is likely to result in more traffic jams, Hyderabad traffic police appealed to the citizens not to immediately start their journey after the stoppage of rain. "Wait for 1-2 hours for the rain water to drain out and also for the traffic congestion resulting from heavy rains to ease out," traffic police said in an alert. It also urged citizens to avoid unnecessary or not so important travel.

The fresh spell lashed the city even as some low-lying areas hit by last week's downpour remained submerged.

Hyderabad has been receiving heavy rain for the last few weeks. According to Telangana State Development Planning Society, the district received 125 per cent excess rainfall

Gates of twin reservoirs Himayat Sagar and Osman Sagar on the outskirts of Hyderabad were opened to let out flood water into the river, which flows through the city.

Hyderabad Metro Water Supply and Sewerage Board (HMWS&SB) opened four gates of Osman Sagar to let out 1,552 cusecs of water. The level of the reservoir on Tuesday morning stood at 1,786 feet against full tank level of 1,790 feet.

Two gates of Himayat Sagar were also opened to release 660 cusecs of water. The water level in the reservoir was 1,761 feet against full tank level of 1,763 feet.