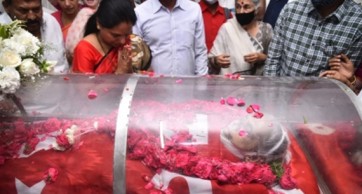 She had participated in Telangana armed struggle against feudal lords between 1946 and 1951.

A former member of Andhra Pradesh Legislative Assembly, she breathed her last around 8 p.m. at a private hospital. She was 91.

Mallu Swarajyam was a member of the central committee of the Communist Party of India (Marxist) and later a special invitee till the end.

The body of the communist leader was later taken to Nalgonda district. After keeping it for a few hours to enable people to pay homage, it will be handed over to Nalgonda Government Medical College as per her wishes.

Born into a feudal family in 1931 at Karivirala Kothagudem village of Thungatarthy of undivided Nalgonda district, Mallu Swarajyam was attracted towards communism in her teens.

She played a key role by not only mobilizing people by signing revolutionary songs but also picking up a gun to serve as the female commander. She carried a prize of Rs 10,000 on her head.

As candidate of CPI(M), she was elected to Legislative Assembly of united Andhra Pradesh from Thungathurthy Assembly constituency for two terms - 1978 and 1983.

Meanwhile, the Politburo of the CPI(M) on Sunday expressed its deep grief at the passing away of Mallu Swarajyam.

Mallu Swarajyam plunged into the movement against the Nizam's feudal oppression at a young age. She participated in the Telangana armed struggle from 1946 to 1951. She got training in the use of weapons and inspired many women to take part in the struggle, the Politburo said.

It noted that she broke many social traditions to stand by the oppressed people and continued to serve the communist movement for over seven decades.