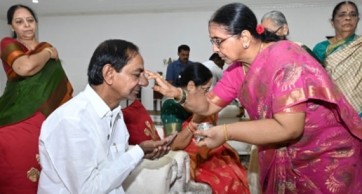 The unique bond between brother and sister was on full display at Pragati Bhavan, the official residence of the chief minister, as his four sisters tied him rakhi.

KCR's wife Shobhamma invited her sisters-in-law in a traditional manner. There was gaiety enthralled the residence

KCR greeted his sisters who tied rakhis to him and took their blessings.

Sister Alekhya tied rakhi to her brother Himanshu. On this occasion, KCR and Shobhamma blessed their grandson and grand-daughter.