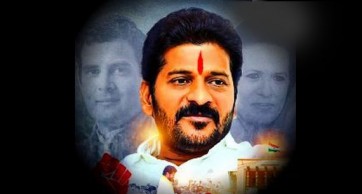 In a video message, the Telangana Pradesh Congress Committee (TPCC) president said that he is making an unconditional apology for the remarks made by Addanki Dayakar at a press conference and at a public meeting in Munugode Assembly constituency.

Revanth Reddy said Bhongir MP felt hurt by the remarks made by Dayakar and he had demanded that TPCC chief apologise for the same.

The state Congress chief stated that such a language is not good for anybody. He also said making insulting remarks to Venkat Reddy who played a key role in formation of Telangana state is not proper.

TPCC chief's apology came a day after Venkat Reddy stated that he would not participate in the by-poll election campaign in Munugode Assembly constituency, which fell vacant due to resignation of his brother Komatireddy Rajagopal Reddy, who has decided to join the BJP.

The Bhongir MP and AICC star campaigner Venkat Reddy, however, made it clear that he would continue in the Congress party and he would die as Congress party trusted activist.

Venkat Reddy blamed Revanth Reddy for alleged mudslinging on him by a party leader at a public meeting held in Chundur recently.

"The person who abused me in a public meeting was innocent. The TPCC leaders deliberately encouraged the Munugode Congress party leaders to target me by abusing them in their speech," Venkat Reddy said.

He had also found fault with Revanth Reddy for failing to initiate action against Addanki Dayakar.

"He abused me in a public meeting in the presence of senior leaders, including the TPCC president but none tried to condemn or control him," said the MP.

The MP also claimed that when the TPCC decided to conduct a public meeting in Munugode constituency, he was neither informed nor invited.

Venkat Reddy had earlier taken exception to certain remarks made by Revanth Reddy while criticizing Rajagopal Reddy after his decision to quit Congress party.

The TPCC chief had subsequently clarified that his remarks were intended only against Rajagopal Reddy and not his brother Venkat Reddy.